Welcome to Flack Publishing, the website that promotes Bewdley-centred local history books both fiction and non-fiction

"Walking Bewdley's History" was launched in 2017 - history and walks in a pocket-sized, spiral-bound little volume.  It is for sale in the Tourist Information Centre, Bewdley, and in the shop at the Museum of Carpet in Kidderminster and costs £6.50.  You can purchase it direct from the publisher by sending a cheque (made out to Heather Flack) for £8 to 23 Stourport Road, Bewdley, DY12 1BB; the cost includes p & p.  A second edition (updated and with more information) was launched in the autumn of 2020.

​A similar book called "Walking Stourport's History" was launched in 2018.  This also costs £6.50 and is for sale in Stourport Library, The Civic in Stourport, the Museum of Carpet shop in Kidderminster, Bodenham Arboretum and Ashwoods Nursery.  It can be purchased direct from the publisher for £8 (see above).

And now there is also "Walking Kidderminster's History", launched late in 2019.  This is in the same format, but because Kidderminster is a bigger place, the book has more pages, so costs £7.50.  It is for sale at the Museum of Carpet shop and the Town Hall in Kidderminster as well as at Bodenham Arboretum and Ashwoods Nursery.  The cost of buying direct from the publisher is £9.

All Flack Books still in print are available from Wyre Forest Books, a shop in Load Street, Bewdley.  If you want to pay by credit card, you can contact Wyre Forest Books or use Amazon Seller.

A new book has been launched - "Death in the Severn".  The co-authors are Fen Flack and Burlish Park, the latter being the pen name of Burlish Park Primary School.  The story is set in Wribbenhall and Ribbesford and has at its heart two boys aged about 10 and 12.  The blurb says:
"The Anglo-Saxon folk at Wribbenhall in North Worcestershire are horrified to find the fish in the river are dying.  Can Matthew and his new friend Osgot solve the mystery?  Or will there be more deaths before a solution emerges?"
The book is available at Wyre Forest Books, Load Street, Bewdley and also at the shop at the Museum of Carpet in Kidderminster.  The price is £7.99 and the cost of buying direct from the publisher is £10 (which includes postage and packing).
One purchaser has already made this comment:
My ten year grandson Oliver is an avid reader and I wanted to give him something to read which he would both enjoy and educate him. He was thrilled to start 'Death in the Severn' and has hardly put the book down since.     Anthony Collins
Below is the front cover and some of the illustrations.
​
​

​For the IRONSIDE trilogy, see the dedicated page.

Bewdley under the White Rose is the result of a local school project and is an imaginative picture of Bewdley in the late medieval period.

In 1433 Bewdley came into the possession of Richard Duke of York and in 1461 became a royal manor under the first Yorkist king, Edward IV.  The authors have tried to paint a picture of life through these troubled years (which ended the medieval period and led to the triumph of the Tudors) by using fictional letters, wills and poems, interspersed with real historical facts.

The period, of course, covers the momentous events of the Cousins' War, more familiarly known as the Wars of the Roses.  It looks as though Bewdley really suffered in this period, the Yorkist settlement becoming a target for Lancastrian aggression.

Fenella Flack is well-known for her knowledge of local history and worked with pupils from the Bewdley School and Sixth Form Centre to produce this fascinating picture of a small Worcestershire town.  B. S. Severn is the pen name of 31 pupils from 2013's Year 7.


The book is also available as an ebook, the reference being http://www.amazon.co.uk/dp/B014WKQG18.
There is a 5 star review by Jayne Crooks posted on Amazon: "Fascinating read and well put together with stories interspersed with factual information.  I learned a lot.  I particularly enjoyed some of the pupils' letters written as fictional characters in history, which helped to set the scenes.

Comments people have made:


A most enjoyable and informative read.  The youngsters obviously took the subject to heart, inspired by Fenella's enthusiasm, to produce these totally believable letters. (Olive)


It's a super book.  I really enjoyed reading it.  (Louise)


This is a very easy read of historical events.  I love the way it is woven into fictional letters which makes history more enjoyable. I think future generations will enjoy history lessons more and remember history more easily if they look at local events.  Well done to you and the students of Bewdley High School.  (Pauline)

"Pieces of Wyre", as the name suggests, consists of short items relating to the Wyre Forest area of Worcestershire.  These are in the form of stories, poems and playlets and are all inspired by local historical events.  There are two volumes with ten pieces in each volume and both are the work of Fenella Flack.

The cover picture illustrates the oaks of the Wyre Forest, the ferry at Arley, the tin and iron works at Cookley, Harvington Hall (famous for its priest holes) and a canal boat at Stourport (the only town created as a result of canal construction).

Volume 1 has 83 pages and Volume 2 has 92; both are illustrated with pictures in colour and black and white. The usual retail price is £6 for each volume.
Copies can be ordered by sending £7.50 for one volume or £12.00 for two volumes (p & p inc.) to the address below, cheques to be made payable to "Heather Flack".
The contents of the 2 volumes are:

Volume 1:
Kidderminster Under Threat - Harry Cheshire School in World War 2
Confessions of a boatman - a trowman on the Severn is unfaithful
The Black Rose - bemoaning the fate of Kidderminster Playhouse
Hard Work at Harvington - experiences of a servant in 1603
Ribbesford Unfinished Business - a legacy from the Free French
Weaving a Future - hand loom carpet weavers in 1853
Melt Down - a poem about chocolate
Inspired in Areley Kings - a young man discovers Layamon
Cookley's "Rough Music" - the village unites to shame
For Better, for Worse - an 1861 marriage in Upper Arley

What great books - I enjoyed them so much.  (Janey)

Your books are even more fascinating than I imagined. It is so interesting to see historical details translated into stories. (Helen)

I enjoyed your books bought yesterday.  I sat last night and read both from cover to cover.  A wonderful way to get historical facts over to anyone.  Well done.  (Olive)

It's a wonderfully original concept and a well-written book that's a delight to read.  (Liz)

I read the first three "pieces" in bed last night - lovely stories, woven into the historical "pieces".  You have a gift for writing.  (Sylvia)

You do indeed have an extraordinarily effective way with words!  (Tony) 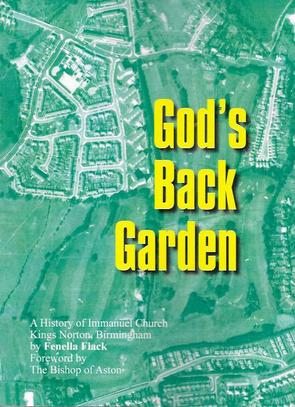 And now for something different!

God's Back Garden
Fenella Flack was commissioned to write a history of Immanuel Church, Kings Norton, Birmingham.  The resulting book was launched in November 2014.


Kings Norton expanded rapidly in the 1960s and 1970s.  The Revd Chris Copeland and his wife Joan were given the task of serving the area centred on the old Kings Norton golf course, where the greens and tees were disappearing under houses.  Their story is one of tears and joy, heartbreak and breakthrough.


Others have followed, each period of ministry providing something different. The hope of having its own designated building has always eluded this church, so its history remains a story of people who found (and still find) ways of encouraging the spiritual dimension of their area without an ecclesiastical edifice.  Perhaps that has been its strength.


The chronological history of events is interspersed with topics such as Having Fun, Charitable Giving, Mission Links and Schools, and also more than ten personal stories of how God has been at work in people's lives.


As Andrew, Bishop of Aston, says in his Foreword, it is a "story of ordinary people ("our tatty band") making an extraordinary difference in a community they serve...  What comes across from these pages above all is warmth, welcome and commitment."

A church in Bewdley


There was a chapel in the heart of the town, according to Leland, who visited around 1540.  It had probably been there for two centuries by the time he saw it, for in it was stained glass of Edward IV who died in 1483 and anyway, there is evidence Bewdley as a town was established in the late 13th century.


The earliest building was timber-framed.  It is said there were shops "below it".  Most take this to mean the chapel was physically at first floor level with shops beneath.  But perhaps "below" simply means further down the street.


The chapel had three chantries, these being dedicated to the Virgin Mary, the Holy Trinity and St. Anne.


The town corporation paid for the new church building in 1745 - classic Georgian but sadly rather shoddy and proving very difficult to keep clean.  The Victorians added coloured glass to some of the windows, but it still has a light interior.


The dedication is to St. Anne, the supposed mother of the Blessed Virgin Mary.

Flack Publishing is based at 23 Stourport Road, Bewdley, Worcs. DY12 1BB and is run by Heather Flack